MCSharp was a mcw:classic multiplayer server. It focused on bots and physics to add more gameplay elements. Like many custom servers it had multiworld and used a nonstandard map format to support its extended behavior.

A player's rank would determine what commands and blocks were available.

Banned
Players ranked Banned could still log in and interact with the map, but the interactions wouldn't be saved or propagated to other players.

Guest
By default only allowed to build/visit the main map.

Operator
Could only be set via server settings.

Users could send private messages, whispers, send to the admin channel, and send to all visible players

There were commands for managing the server, its worlds and it players, commands that helped with building, and commands that added game elements such as bots, flight, doors and other physics.

The server had native support to connect to an Internet Relay Chat server to pass messages between the server and the chatroom.

The IRC bot and the in game bots were not related. 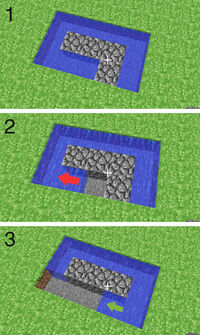 Physics could be disabled, enabled, or set to advanced, progressively adding more block interactions and animations. Each world could have its own physics setting.

MCSharp internally differentiated between several kinds of air, water, lava, etc. to get more complex physics than the official server. The physics and the player-interactable block variants such as "door" blocks made the maps much more dynamic than other servers.